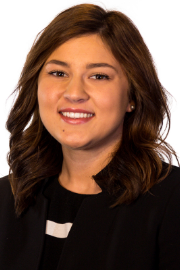 
Autumn is the International Program Manager at the Leadership Institute where she has successfully managed programs across six continents. Throughout her career, she has developed specialist skills in communication and media. In 2017 Autumn co-launched End Game Consulting, a consulting firm that specializes in fundraising, direct mail, design, and media for federal campaigns.

Previously, Autumn was LI's Communications Training and Studios Coordinator where she managed and developed public speaking, speechwriting, and debate workshops; on-camera training; and online journalism workshops. She made it possible for her division to have a record-breaking year in 2017 with the most conservative activists trained in a calendar year. She regularly works with a wide network of journalists and media consultants.

Autumn enjoys traveling in her spare time. She has traveled extensively covering forty-three states and thirty-six countries. Her personal trips have specialized in poverty alleviation, teaching, and mentoring.

When Autumn is not traveling the world, you can find her playing beach volleyball for a DC sports league.